DHS Students Fall in Love with This Year’s Fall Plays: She Kills Monsters and You Can’t Take it With You 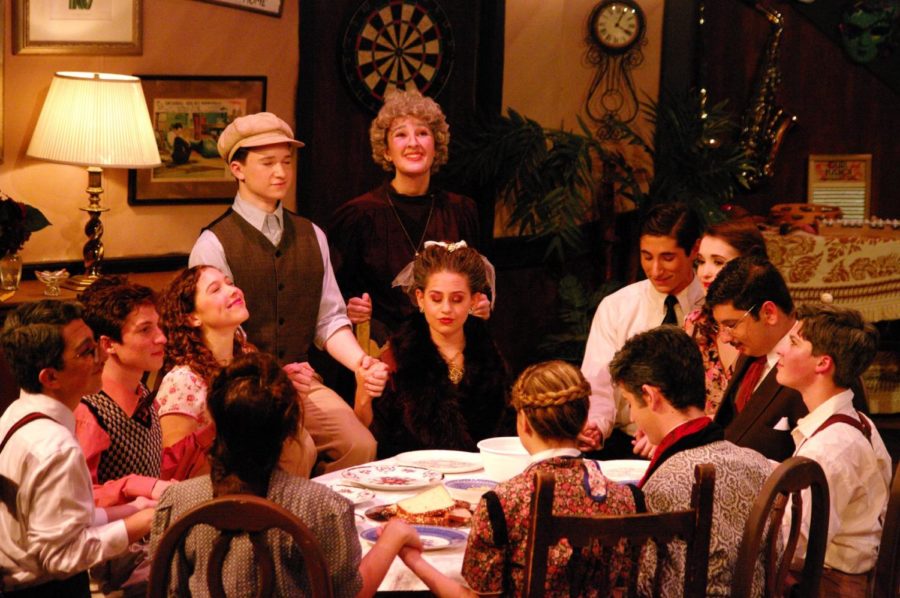 The Sycamore family in You Can’t Take it With You gathered around the dinner table. (Image courtesy of the official DHS Friends of the Arts Facebook page.)

The season of fall brings many joys to the Deerfield community: red-orange trees, cool weather, and at the high school, a transition from the fall sports season to the more artistic side of student life: the annual fall plays. This year’s plays exceeded expectations, thanks to a variety of reasons, including the gripping plots, beautifully made sets, and dedication by the directors. This year’s fall plays took place in October. The first was She Kills Monsters by Qui Nguyen and the second was You Can’t Take It With You by George S. Kaufman and Moss Hart.

Fall Play I, which was She Kills Monsters, had four shows that ran October 10-12, with two Saturday shows. It tells the story of 25-year-old English teacher Agnes, who is grieving the death of her 15-year-old sister, Tilly. Because the two sisters weren’t particularly close in real life, Agnes is determined to learn more about Tilly through an old Dungeons and Dragons module that she created as a child. In this journey Agnes learns about Tilly’s sexuality and how she was bullied for it at school, as well as the importance of several close friends that Tilly made, who are cleverly presented as fantasy characters in the game.

It’s a humbling story of love, acceptance, and courage that reminds all to not judge one another based on surface-level interpretations. Theatre director Britnee Kenyon touched on the meaning this play brought to her, explaining that “it’s a really beautiful look at what family relationships actually are and how they can be really challenging. It also shows how discovering new things about your family can help you grow as a person.”

Margaret Weiner, who plays Agnes in She Kills Monsters, thinks this play is special because of the message it sends. “I think this play is special in particular due to the messages it addresses. While the flashy lights, sound, and fight choreography do make it very fun, there is a very raw beautiful storyline. The show has messages of female empowerment, family, connection, and addresses LGBTQ+ issues. I am so proud to be able to share these messages with an audience.”

If the rich storyline wasn’t moving enough, the set was breathtaking by itself. The lighting and fight choreography was truly “magical”. The flashes of color, smoke machines and fog, and spotlights on victors of the play’s many battles made watching She Kills Monsters a truly incredible experience. On top of that, the fight choreography also is truly remarkable. The cast uses real swords, adding an edge to the fight scenes. The amazing set designs never failed to amaze an audience of all ages and transport them into the world of Dungeons and Dragons.

She Kills Monsters was also the first production put together by DHS’s new theatre director Britnee Kenyon. Kenyon previously taught at Rolling Meadows High School for five years and now oversees all things theatre here at DHS. She teaches theatre classes and is the director of Fall Play I and the musical. When asked why she chose She Kills Monsters as one of the fall plays, she answered, “I really enjoy the messages behind this piece. I think it’s also a really relevant piece of theatre. So it’s something that students can definitely absorb and understand. It also is a really high energy physical show and I really enjoy physical theatre.” This year’s first fall play captured the audience with its fast pace, and kicked off the school year with a great start.

This year’s second fall play was You Can’t Take It With You. This play tells the story of the eccentric Sycamore family who live next to Columbia University in New York. The Sycamores are quite unconventional–from ink printing to capturing and keeping snakes, the list of bizarre hobbies are endless. When the Sycamore’s youngest daughter, Alice, becomes engaged to Tony Kirby, who is the vice president of the Wall Street company she works for, the Sycamore family quickly realize that they need to shape up in time to meet the Kirby’s.

This fall’s productions share in a particular theme: acceptance. You Can’t Take It With You especially sheds light on individuality and happiness, testing whether these two concepts are mutually exclusive or not. Janie Oken, who plays the grandmother of the Sycamore family, adds, “it’s a story about making sure that it is OK to be who you want to be.”
Quirkiness can be observed through dialogue and the set in particular. The walls zig zag across the theatre, which were filled with a variety of framed paintings and sloping shelves. The design captured the eccentric nature of the family, allowing the audience to feel as if they were another member Sycamore family.

Helen Crowley, who teaches in the social studies department, was the director for this play. Crowley is experienced in directing and her productions include Diary of Anne Frank, which was last year’s fall play. Oken praised Ms. Crowley and her direction for her “fantastic job of bringing people together, and character work is made fun.”

Both of this year’s plays were an inspiring demonstration of the talent of DHS students and staff. Weiner, Kenyon, and Oken all hope that both of them inspired and impacted audience members.