A Spotlight on DHS Fine Arts 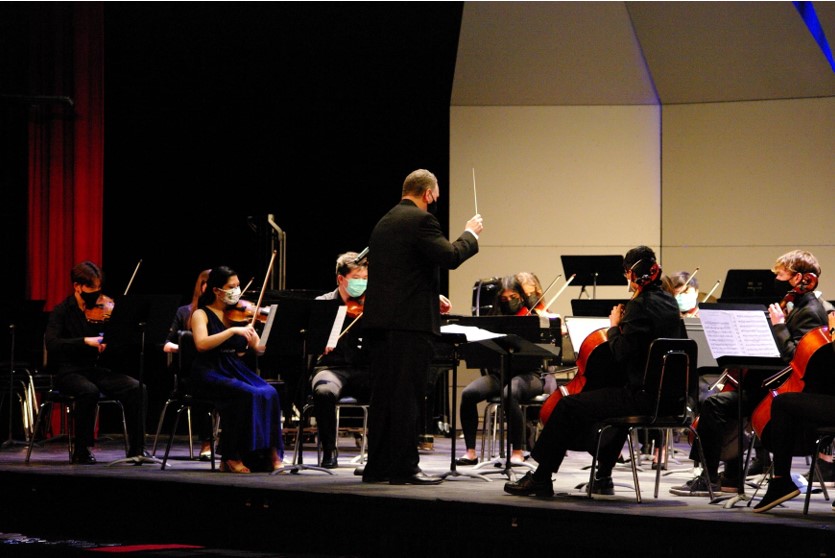 Image courtesy of Friends of the Arts

With the end of the school year rapidly approaching, DHS Fine Arts takes a bow at the curtain call of a successful season. Band, orchestra, theater and choir have had to survive, overcome and adapt to new mediums of technology, learning and performing. With their plans cut short last year due to the COVID-19 pandemic, these activities came back with a vengeance. Concerts and plays alike have had to enter the school year to a more virtual platforms, with limited resources and strict regulations.  Needless to say, it was not easy. Looking behind them, a year of challenges and looking forward: a promising future.

Before looking at the achievements the fine arts have made this year, there must be some acknowledgment of when it started. Flashback to March 2020, it is the middle of the spring season for many clubs and activities. Orchestra and band have concerts, and the theater has just finished it’s production of Mama Mia. Then suddenly the school is closed. Band and orchestra say goodbye to their concerts, with some music specifically from the band never reaching the ears of listeners. What followed next is what Mr. Velleur, director of orchestra, describes as a “holding pattern.” Small scale projects were done, with an increasing reliance on technology. Directors were pushed into the roles of video editors; they had to adapt to something most of them were entirely unfamiliar with―collaborating sounds and mixing them together to do their best to give their students a sense of normalcy through music.

At the beginning of the 2020-2021 school year, the arts were ahead of the curve. As Mr. Velleur put it, “Essentially we started hybrid learning from day one.” It was key for the arts to be meeting regularly in person from as early on as possible. After a few weeks of working it out with the administration, many students of the fine arts were meeting once a week synchronously and in person.

The evolution continued. Ms. Kenyon, theatre teacher and director at DHS, described the experience, “We were very much afraid in terms of COVID but also really nervous of whether or not we could pull anything off. The more productions we did and the more successes we had, we came to the point where we were just like okay let’s do it! We came to realize that we needed to do Lost Girl live.”

Near the end of the year, orchestra, band and theater have all had the chance to do productions or shows in front of a live audience; something that in previous years, everyone may have taken for granted.

This season of DHS Fine Arts can also be described with two words: “learning curve,” not just for students but for teachers as well. Directors had to convey art through a new, and relatively foreign, online medium. Ms. Holt, director of the band, commented, “The amount of time that takes is just astronomical and nobody was set up to do that back in the spring. Most of those videos that you see… directors are spending 70, 80, 90 hours and that’s after we all figured out how to do that in the summer.”

Sometimes, in the isolated environment that quarantine entailed, fine arts students―whether in orchestra, choir, band, or theater―struggled to stay motivated. It was up to the directors to be the rallying call and motivator for their students. Mr. Velleur said, “It becomes really hard when you feel like you’re charging up the mountain and be the one saying; here we go we’re going up the mountain! And then you look around and are like: ‘who’s coming with me?’”

Through thick and thin, DHS Fine Arts have been ahead of the curve. From in person instruction in the fall, to live productions in the spring; there has been progress made and boundaries broken. This year, plenty of challenges were overcome through the hard work and dedication by staff and students alike. In the future, promises of a renovated auditorium and more live audience events await the Fine Arts program. Here’s to a great season! Bravo!