Senior Will Hulsey is Tee-riffic 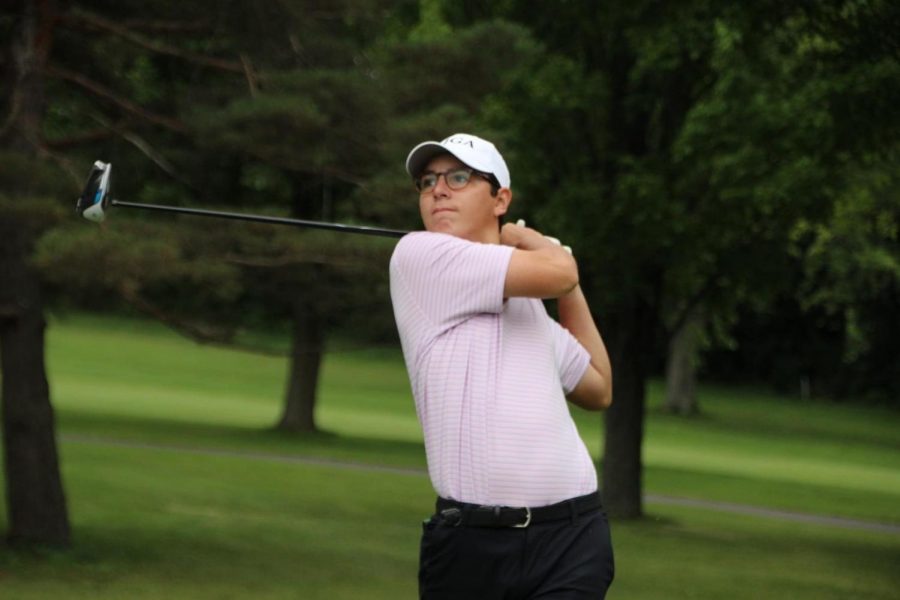 Will Hulsey taking a swing on the golf course. Image courtesy of Will Hulsey.

Will Hulsey is a senior who has just committed to Kenyon College in Gambier, Ohio. As a result of his substantial achievements in the sport, he has earned a spot on the golf team at Kenyon. When he was a freshman, he made the varsity golf team, and he has played for them ever since. He has devoted so much time and hard work towards golf, and he anticipates a bold start on the collegiate level.

Inspired by his father, Hulsey began golfing at a young age, and he was passionate about it from the start. Although he was merely in preschool at the time, he still wanted to be on the course. The sport became a central aspect of his life, and he practiced every day. Hulsey recalled, “My mom would always say in preschool, ‘Do you want to go to the park with your friends or go to the golf course?’ I would go to the golf course.” The commitment that Hulsey put into golf at only five years old was incredible. Since then, his dedication has persisted. This past summer, while many people were having fun with their friends at camp, Hulsey was on the course for hours on end. He explained, “Every single day I was out there. I don’t do anything else during the summer. I practiced for five or six hours a day all week.” The effort that Hulsey puts into preparation is admirable and his game performances show it.

Although Hulsey has had many athletic achievements, he had a hard time academically during the COVID-19 lockdown. The pandemic forced Hulsey to stay home from the end of his sophomore year until the last two weeks of his junior year. Whereas many students returned in person at the end of the third quarter, Hulsey remained remote. He said, “It was very hard, especially when everyone went back and I was staying home. It was very hard to focus.” This was difficult for him: he was productive in person, but he found it challenging to focus online. When he returned for the last two weeks of school, he stated that it felt much better and it was something that needed to happen. He elaborated, “It was very hard to focus, and I went back to school with two weeks left and bumped my grades up by a full letter.”

Brian Gryn, the head varsity golf coach at DHS, has trained Hulsey for four years. He remembers how much Hulsey had impressed him, even from the beginning. Gryn recounted, “The first day of tryouts as a freshman he chipped in, in front of everyone, for an eagle.” Over time, Coach Gryn has watched Hulsey grow to be an excellent player and has increasingly appreciated his character. He explained, “I would say that his patience on the golf course, his ability to bounce back from a bad hole, and his belief in himself are the three biggest attributes to his game.” Beyond these qualities, Coach Gryn also describes Hulsey as productive, respectful, and proactive.

Jackson Goodman, a senior on the golf team, is one f Hulsey’s close friends. Over the seven years that they have known each other, Goodman has watched Hulsey become the athlete he is today. Goodman said, “He’s experienced enough that I know I can get pointers and extra information and learn about clubs and courses. It’s great to have him as a friend, teammate, and leader.”

Will Hulsey is not only an exceptional golfer, but also an outstanding athlete, friend, and student. After working so hard, he has finally reached his dream of becoming a college athlete. As he prepares to attend Kenyon College and play on its golf team, his friends and teammates from DHS will cheer him on all the way.