Moving out of R-Hall: How DHS seniors continue their passions 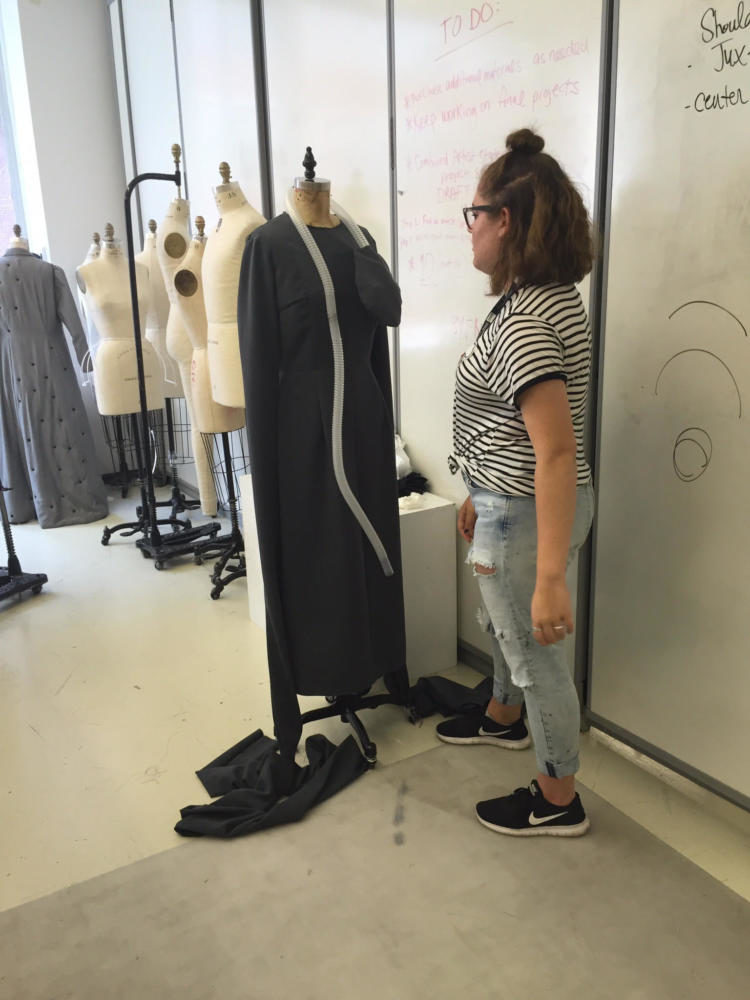 The fine arts often go unappreciated in today’s academically focused society. But art is ever-present in the world around us. From the music on the radio to the clothes we wear, it’s an invaluable part of the way we see the world around us and how we go about our lives. Many of our own DHS seniors have exceptional love for the arts, with some even choosing to follow their passion into university programs.

Elita Erntsteen’s passion for musical theater originated way back in elementary school. Inspired by her older sister’s involvement in acting and music, Ernsteen followed in her footsteps and started auditioning for roles at a young age. Her love for musical theater blossomed when she was eight, after being cast in a production of “The Sound of Music” and earned the opportunity to go on tour.

“So in third grade I went with my mom to China for four months,” Ernsteen recounted, “and I was just surrounded by all this talent that made me fall in love.”

Since her time in the tour, Ernsteen has been involved in musical theater both inside and outside of school. She’s been taking voice lessons since she was eight, and has been a part of an acting ensemble outside of school for seven years. Taking chorus all four years at DHS has also impacted her love of music. “I’ve really found a community with that,” Ernsteen said. “Prior to doing classes here I was always trying to get the solos and such, but here I learned that singing in a chorus is just as important.” She also took theater for all four years and was involved in quite a few DHS shows, such as “Children’s Hour” and this year’s production of “Cats.”

Ernsteen will be following her love for musical theater into college. This fall, she will technically be attending Molloy College in Long Island, though she will mostly be taking courses through the Cap21 musical theater program in Manhattan. Ernsteen is excited to major in musical theater and learn even more about the thing she loves in her classes.

“There’s something pretty magical about being able to tell someone else’s story, and I’ve always enjoyed the complexity of musicals.” she explained. “I’ve definitely been changed by seeing other musicals and I would love to be able to spread that kind of message. And it’s also one of the only things that I’m truly passionate about.”

Ernsteen has also faced some disapproval because of her decision to pursue a degree in a fine art. The common misconception that majoring in the arts shouldn’t be considered a real education is one that she’s familiar with. “My [grandmother] has told me ‘I wish you would take some more classes that aren’t from your major because you need to know real knowledge,’” she recalled. “But every time I do a role I have to do so much research into that role, and I learn so much through that each time I do.”

Undeterred by this misconception, Ernsteen is determined to pursue musical theater. It’s what she’s most passionate about and she considers it to be a central part of her life.“I think it’s very important that fine arts majors are treated just as importantly as finance and anything else that people are going into because those are the people whose stories are going to be told,” she said. “I think that the fine arts, especially in the present day, need to be appreciated more and more.”

Peter Morin has been playing the viola ever since third grade, when he first chose the instrument at the Walden Music Fair. From that point forward, his dedication to music continued to grow as he became involved with the Music Institute of Chicago’s Academy for Strings—or “The Academy” for short.

“The Academy is essentially a music school outside of high school,” Morin explained. “It’s on Saturdays and it’s pretty much all day so it is a big time investment. It’s comprehensive; so it’s music theory and master classes, which is where a really good player comes in and teaches us. And then we obviously have orchestra rehearsals and chamber rehearsals.” Through the Academy, Morin began to learn more and more about music.

Although music has played a large role in Morin’s life, he doesn’t consider it to be the center of his world. He’ll be majoring in economics at Northwestern University this fall. “I just couldn’t see myself giving academics completely for music. I’m also a pretty rational guy, a pretty not risk-taking guy, and music is really risky. Especially in this modern world, where it’s becoming less and less of a fixture in society,” he said. “The people that are more passionate about it than me, they quit school so that they can actually play music, and I’m not really quite sure I’m ready to take that leap just yet.”

Music is still a very important part of Morin’s life. Although he may not be majoring in music in college, he still plans to take many courses centered around orchestral playing and chamber music as a part of his studies. He was also accepted into the National Youth Orchestra, a group of young performers selected through auditions to play on tour and even in Carnegie Hall. “I mostly got involved with that through my peers, which is one of the reasons I like the Academy so much,” Morin explained. “They have auditions in the fall and the results come out in the late winter. And so I auditioned, and after I found out that I got in.” Morin will be touring with the National Youth Orchestra in Latin America this summer before going into college.

Morin’s life may not be focused on music, but it’s still something that’s very valuable to him. “This is going to sound a little cheesy, but with music I see the beauty in more things. And I think that’s really important. Because in our world, it’s really easy to get bogged down in all the myriad of the negatives in our lives. So it helps me to see the world through that lens instead.”

Cassidy Jackson has—as she’s been reminded countless times—quite the “passion for fashion.” It’s an irreplaceable part of her life and as result, this coming fall, she will be attending Pratt Institute in Brooklyn to study fashion design.

Jackson first discovered her love for clothing design in the third grade when her grandmother taught her how to sew. “I made myself a little drawstring backpack and I was more proud of that than anything else in my entire life,” she recalled. “I was obsessed with it, and the idea of making something with your hands was really cool to me.”

Like many inspired artists, Jackson’s dedication to her craft only grew as time went on. Although she didn’t sign up for the fashion class at DHS because she was able to read the textbook for the course in eighth grade, she continued to work on her own projects and took classes at the Art Institute of Chicago instead.

When the time came for Jackson to apply to colleges, she described the process as a bit stressful. Since she knew she wanted to get an arts degree, the process was a bit different for her. In addition to writing essays and getting recommendation letters, she also had to submit a portfolio comprised of her work, something that she started working on her sophomore year.

Regardless, Jackson was determined to pursue her degree in fashion design. “There’s nothing in my life that has ever made me feel this passionate, and I truly can’t imagine my life any other way,” she said. “I can’t imagine myself going to business school, or just not doing this or pursuing this—it’s kind of my everything.”

But deciding to major in fine arts presents its own set of difficulties. Jackson has experienced a lot of negative reactions when telling people that she is pursuing fashion. She’s been advised by many to get a degree in something more “practical” for fear that majoring in the arts would ultimately lead her to be poor, “Which is kind of really ridiculous to me,” Jackson said. “Because the fashion market is one of the biggest markets, especially in the United States, it’s like a three trillion dollar business. There are tons of jobs in fashion and I think that that’s just super underrated.”

There are also a lot of stereotypes about being involved in fashion that Jackson has to combat.

“A lot of people will stop taking me seriously, because they assume things like ‘Oh, she’s a girl and she’s interested in clothes, so she can’t possibly be smart or interesting or cool,’” she recounted. “But my academics are really important to me, and I consider myself to be really intellectual and I consider my fashion and the work that I create to be really intellectual. Because for me, artwork is a way of communication, and you can’t be stupid and be an artist.”

Jackson’s love of fashion design is one that she’s determined and excited to follow into college. “It’s my work and my art; I guess it’s like my life,” she said. “It’s the way that I express myself, it’s the way that I feel most comfortable communicating with other people; it’s fun, and so I just genuinely do not know who I would be without it.”