Senior Swan Songs: “My Name Is” 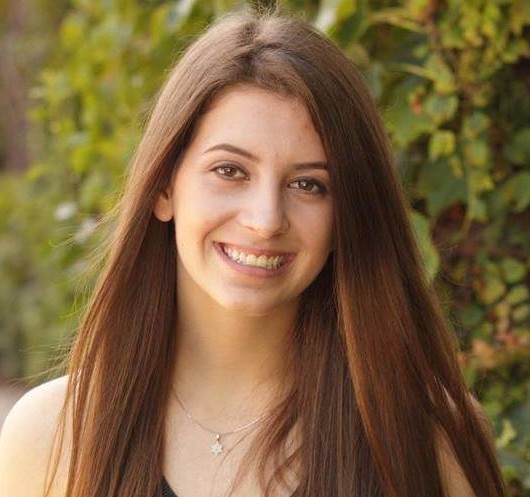 When I was born, I didn’t have a name. It wasn’t like my parents completely forgot to name their child or hadn’t thought of one before I made my appearance on the world’s stage, it was simply the fact that none of the names they thought of fit my face or personality. I may not have had an actual name, but they had to call me something. So, they settled on what I had been called before they could even see if a name did or didn’t fit: “Little Bucket”. Yes, for the first three days of my life I was called Little Bucket. One may ask “Do your parents hate you?”. I know the reason I was given this unfortunate nickname was due to my mom’s increase in weight while she was pregnant with me, which led her friends to call her a bucket. Honestly I’m not sure why. I was born in Israel, and with the official language being Hebrew, the word for bucket is GeGit. So, I’m assuming by a weird form of the transitive property, my name was Little Bucket, or GeGe, which actually showed up on some documents at the hospital. No, it is not pronounced like the name of famous model GiGi Hadid, but, just for a second, imagine saying the ‘g’ in geese twice in one fluid motion. To my sheer disappointment, my parents were actually considering this name for the rest of time. Luckily, one of my mom’s best friends suggested the name Romi, and it has stuck ever since, with the exception of one of my aunts who still calls me by the name that was first on my identification card in the hospital.

Yes, my name isn’t Little Bucket anymore, but it’s not like the name I have now is much easier for phonemes and morphemes of the English language. It has led to some pretty hysterical and pronunciations that are way “out there.” In eighth grade, I joined a new basketball team, and one of the coaches mispronounced my name pretty badly. I was afraid to correct him, along with the fact I was the new girl on the team. So, he called me “Romney” for a solid two months until I mustered up enough courage to tell him that I did not share a name with the 2012 Republican presidential nominee.

At the end of that basketball season during the summer of 2013, I moved from my home in Michigan to the new and evermore exciting city of Highland Park a week before freshman year started. I had been accustomed to the people I knew in Michigan, and they had become used to the pronunciation of my name too. Moving to a new city meant a new crowd of people, and the higher the probability that the “Romney” fiasco would happen all over again.

About three years after I moved from Michigan to Illinois, I was babysitting my neighbors, who were in third and fifth grade. We were all hanging out on their couch when the third grader asked, “Romi, why do we have a name?” Initially, I was taken aback by her question because having a name is something I knew was necessary, however, I didn’t really think about the effect our names have on who we are.

Whether you grew up on the infamous street of 8 Mile like Eminem, or the much more quiet street of Fourteen Mile like me, or your name is Little Bucket or Lil Boat, your name is something that is constantly following you no matter where you go.

People collect experiences throughout their lives and always keep them no matter how far they go. Experiences collect like rain water in a bucket, and it gets filled with the different things it’s attached to. Think of a name like a bucket, a little one if you may, that is constantly filled with different experiences, until it’s too full or get’s taken away prematurely. Sooner than you think is possible, your high school bucket isn’t going to be accessible anymore. The name you heard calling you to the field or court will be called one last time, getting to sign your name to join a club won’t be possible, shouting your friends name to get their attention in the hallways or cafe will only happen over FaceTime or a phone call. Sooner than you think is possible, your name is going to be called at Ravinia, and your DHS ID will just be a token of the past you find while cleaning your room.

Make the most of your name, stay true to what you think it means and don’t take it for granted, no matter where you go or what you do. Even if you share the same name with what seems like half the grade, or if you can’t find your name on a keychain no matter how hard you look, make your name yours.

Take your name and run with it. Hi, my name is Romi, formally known as Little Bucket, and the real reason we have names? We have our own names to make the most of each experience, each memory, and moment that our names are attached to, and that part is up to you.